Due to wartime shortages, there was not enough wool yarn to create knitted scarves, so companies decided to develop a woven wool material, leading to the distinctive vertical striped style of college scarves today. After the war ended, wool became widely available again, but most universities and other institutions elected to keep the cloth stripe style. 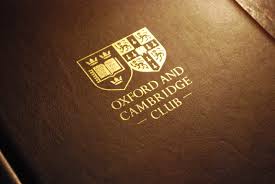 The scarves initially were mainly made for Oxford and Cambridge (Oxbridge) Colleges and boat clubs, but soon became popular with universities all over the United Kingdom. The wearing of academic scarves is a tradition found at many British, New England and Irish colleges and universities. Sets of two or more coloured stripes have traditionally been used as part of the distinctive visual identity of these institutions. The scarves are usually made of Saxony Wool and about 2 metres long. The college colours are used in clothing and symbols of all kinds, from ties to trophies, but notably in the long woollen winter scarves that students and alumni wear to show their pride in their institutions. At some universities, in addition to collegiate scarves, there are also several non-collegiate scarves which have a well-established meaning. For example, those representing the University in sport may be entitled to wear a particular scarf, depending on their level of achievement, or a university department or club may have its own scarf. In addition, some colleges and universities have (for example) separate scarves for senior clubs such as their Boat Clubs.

For examples of the different unique University and College colours please see University/College scarves in the Menu or go to Wikipedia.